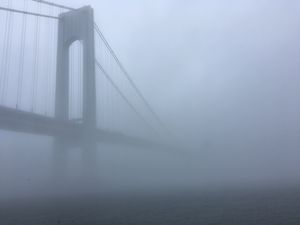 i don't like to turn on the music till i am on the promenade away from cars. as i walk the bike across the bridge over the highway, i can see the top quarter of the big bridge. it's always there. never moves. even when you can't see it. it's a warm winter day and the air is warmer than the water so an advection fog has covered the narrows and the battery, almost reaching the city. i learned about fog in my bay area days. there are a few types of fog but the one that rolls under the golden gate and stretches all the way across the bay covering berkeley is the same kind as this. and it was a very common occurrence out there. it happens here in the narrows but not that often.

i carry the bike down the steps to the promenade, hit 'shuffle,' get on the bike and start pedaling. i hear a ride cymbal playing some fast swing and immediately recognize it to be jack dejohnette. a twelve-string plays chords with harmonics. ralph towner. batik. it goes perfectly with my view. i can see about ten feet out into the glassy water. no wake. there are some ducks and buffleheads floating to nowhere; the buffleheads kind of in formation, the ducks kind of in pairs. i look back and can't see the bridge at all but i can see the anchor on the brooklyn side clearly. typically, you'd hear some ship horns but maybe nobody's moving around out there because i don't hear any. one long blast every two minutes means a ship is 'making way under power.' that's good - sort of an fyi. if you ever hear one, two or three short blasts, that means a ship is going to maneuver. one would mean altering course to starboard, for example. i've never heard that. that would probably mean evasive maneuvers. not good.

the algorithm could know it was foggy, right? it's a 'smart' phone. there is a weather app on my phone. it could just know, couldn't it? how else could you explain not one but two songs from the ralph towner recording? music that goes perfectly with fog; ambient and mysterious. i love this record. i'm finding i say that a lot during this project. but i really do love this one. it's so easy to listen to, yet it is also full of complexity. ralph towner is one of my favorite musicians, too - equally great on both piano and guitar. and i especially like the sound of the 12-string when he plays it - a sound i would typically associate with out of tune folk music. those things are a pain in the ass to keep in tune.

and jack...i may have close to every recording jack dejohnette has played on. i know i have every one under his name. he is far and away my favorite musician and as usual, he plays great on batik. he gives so much to the music - his creativity, his authority, his virtuosity, his humility. there's really no one else i can think of that is like him or has recorded that much consistently great music. find me a recording jack is on that is only just good, forget about bad. there ain't none. and we're talking about 100's of recordings.

eddie gomez. his incredible virtuosity kind of distracts me from the big picture on some recordings. in others, it is just what is needed. three quartets comes to mind as an example of his greatness. batik is another. there is a lot of room in this record for bass to stand out but it kind of doesn't. eddie contributes to the ambient or airy quality of the music with lots of long tones to go along with his incredible solos - a couple of which are with the bow and not so notey. they're almost not even solos. other places, he's the anchor around which the guitar and drums can float and interact. and his tone is so pure it really blends in with the sonic landscape, at the same time reaching your ear clearly. it's all kinds of bass playing. it makes the group a real trio - like a triangle. dude is a master bassist.

the algorithm must have a sense of humor because after 25 minutes of vibing out to the reverb-heavy beauty and subtlety of batik, it hit me with this courtney barnett track and i nearly fell off my bike. loud, angry, funny and sarcastic, courtney barnett gives me hope for the future. she is a young, aussie rocker and this is only her first record. and it rocks. it fucking rocks. the whole record.

in college, i was in a band called, third plane. it started in a bar called, bauhaus, on main street in akron, ohio's, empty downtown of empty storefronts surrounded by empty factories. this was the first song we ever learned. it is from the john abercrombie album, night - one of my favorite all-time albums.
i am playing keyboards. wilbur krebs, guitar. joe brigandi, drums.
Embed for etherraggae

sideshow...the arranging, the orchestration, the vocal harmonies, the chord changes. this is the philly soul sound. they don't make 'em like this anymore.

a few years back i got an email from a guy i didn't know, also on my label, ropeadope. he lived in mexico city and played guitar and had a band called, a love electric. and would i like to join them for a two-week tour-half in cali and half in mexico. i don't think i checked the band out before i responded, i would love to.

turns out, the band is incredible. this was 5 or 6 years ago i did this and they are still going strong. todd clouser is the guitar player and now singer. aaron cruz plays bass. and hernan hecht, the drums. so that's how i met hernan. he is a vegetarian, has a home studio he built and loves his dog. he is from argentina and is very imposing looking. but he is not imposing at all. he is super nice and cool. he just LOOKS mean. he gave me this recording, vitamia hueipi. it's him and trombonist, brian allen and some electronics. again, not the kind of music you would think aaron would make looking at him. i feel i became close friends with todd, hernan and aaron in the short time we were together. music can do that. this music is nothing like, a love electric, a kind of energy-jazz-rock. ambient/avant garde would describe this track a bit better.
Embed for pensatonic 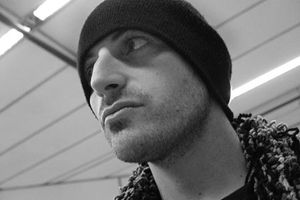